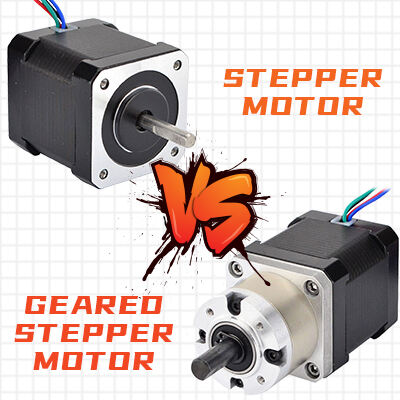 The geared motor is composed of a reducer (gearbox) + a motor. The motor can provide a considerable high-speed speed, but the torque is very small, and the resulting motion inertia is quite large; the function of the reducer is to control the reduction of the speed and the increase of the speed The torque reduces the inertia generated by the movement, and has reached the ideal speed and torque; for example, the rare electric curtains and electric rolling gates all use a geared motor, which has a slow speed and a large torque.

The speed and stop position of the decelerated stepper motor only depend on the frequency and number of pulses of the pulse signal, and are not affected by the corresponding changes due to load changes. Whenever the stepper driver receives a pulse signal, it drives the stepper. The feeding motor rotates a fixed angle according to the set direction, which is called "step angle". The rotation runs step by step at a fixed angle, and the angular displacement can be controlled by controlling the number of pulses, so as to achieve the purpose of accurate positioning. At the same time, it can also be used to control the speed and acceleration of the motor rotation by controlling the pulse frequency, so as to achieve the purpose of adjusting the rotation speed.

The stepping motor can control the fixed length and speed. For example, the worktable walks 1 meter and the speed is 500R/MIN, but the gear motor cannot do it. If it is a three-phase asynchronous gear motor, it can be decelerated through the gearbox, but the speed is not It is easy to adjust, it is necessary to adjust the speed through the inverter, and it is impossible to do as many strokes as I want. If I want to realize the fixed speed function of the stepper motor (fixed-length speed adjustment), I need to work with the inverter and the inverter. Encoders are used together.

Prev
How Stepper Motors Function For Industrial Needs
Next
What checks need to be done before using a stepper motor?
99+
×