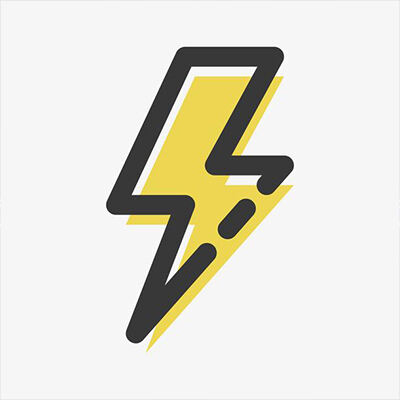 Electricity is a natural phenomenon. The static or moving charge will produce many interesting physical phenomena, such as lightning that can be seen in thunderstorms, and crackling sparks when you take off your sweater in winter. Later, scientists discovered laws from various electrical effects and invented batteries, generators, and electric motors.

Why is the current divided into AC and DC? This is not subjectively divided by people, but divided according to the characteristics of different currents. The earliest direct current was not generated by generators, but batteries. In 1799, the physicist Volt used salt water and tin-zinc metal sheets to make it. As a galvanic battery, electrons move between two pieces of metal, generating direct current.
Using the galvanic cell method, in 1801, British chemist Humphrey David applied direct current to the platinum wire. The platinum wire emits a dazzling white light. Although the cost of this kind of electric lamp is extremely high, it is very easy to oxidize without inert gas protection and cannot be used. It was scrapped in a few minutes, but the prototype of the electric light has been born, and Edison has not yet been born this year.

Strictly speaking, Edison was not the first person to invent the electric lamp. About 20 people had invented the early electric lamp model before Edison. However, since the vacuuming technology inside the electric lamp was not invented at that time, the durability of the filament material needs to be improved. Therefore, commercial electric lamps have not been listed for a long time, and the people can only use kerosene lamps. When the technology matured, Edison acquired the patent and then promoted the electric light to thousands of households, which made him famous. What does this have to do with direct current?

In order to allow residents to use electric lights, Edison built many DC power stations in the city. Early electric lights were connected to DC power, which had a disadvantage. Assuming that Edison’s DC power station is located at location A, residents within a radius of 1 km from location A can guarantee normal electricity use, but the lights in the homes of residents 1 km away are often dim, because the 110V voltage generated by the DC generator, After several kilometers of transportation, the electrical energy is lost on the line, and it may reach less than 60V in the user's home. This is the shortcoming of direct current: it cannot be boosted, and the power is lost too much. But for Edison, what can be done? The DC generators are all built, and this problem occurs! Therefore, Edison built many power stations in the city to cover the city to solve this problem, which is also helpless.

After the shortcomings of direct current were exposed, alternating current began to rise.

The alternating current and the transformer invented at that time perfectly solved the problem of power loss on the line. First, boost the voltage of 110V, and the voltage will increase, and the current will decrease (P=UI), then the thermal power generated on the circuit P=current Multiplying the square by R is much smaller than before. In other words, it is only necessary to build an AC power station in the center of the city, and then install transformers in each district to ensure voltage stability, and there is no need to build DC power stations all over the city. At this point, whether direct current is better or alternating current is better, and the judgement is high.

Prev
What is a linear motor? Why is it widely used in industrial automation equipment?
Next
Fude Electronic: Stepper Motor Manufacturer from China
99+
×